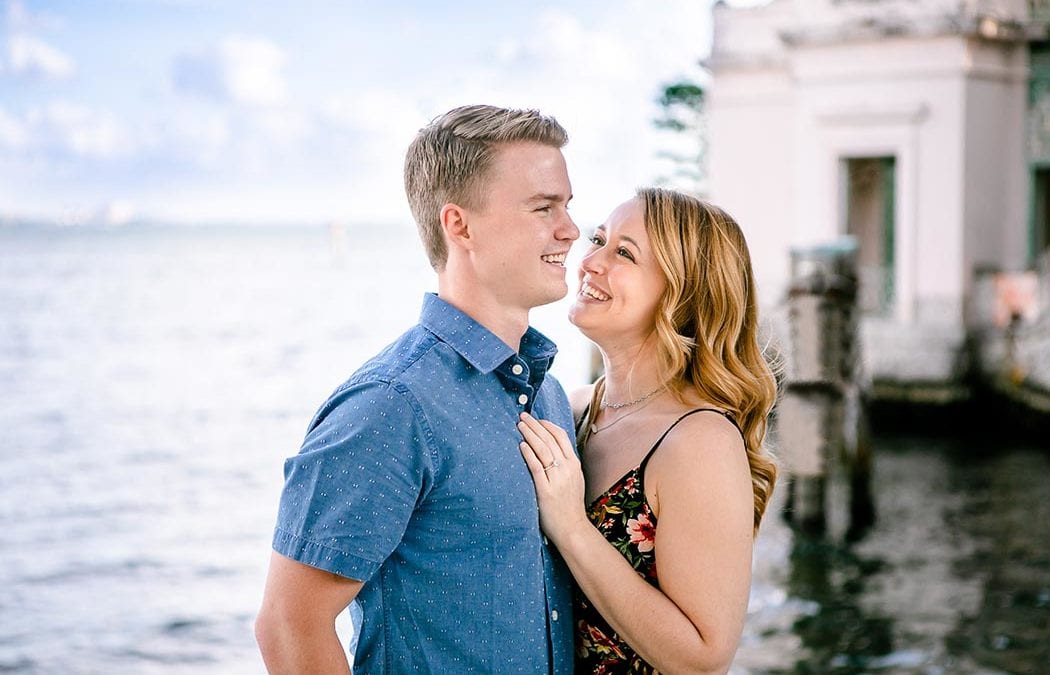 Kevin played it as cool as he could. I was due to hide in anticipation of their arrival and take ‘secret’ photos of his surprise proposal to Ashley at Vizcaya Museum Miami. He couldn’t wait! Before I knew it he was down on one knee with Ashley jumping into his arms with excitement.

Kevin is originally from the Windy City – Chicago. Ashley is from Indianapolis. They met at Purdue University during a party and paired up for a game of beer pong. My kind of couple. They have been together for 8-years and are one of the cutest couples I have worked with. Friendly, fun, modest, and totally adorable.

Kevin chose Vizcaya for his surprise proposal and engagement photography because of the beautiful backdrops. Having captured many engagement photography sessions as Vizcaya, I wasn’t about to talk him out of this gorgeous venue. He chose the spot to get down on one knee by looking at some of my previous proposals at Vizcaya on my blog.

He wanted to keep the proposal a surprise so informed Vizcaya upon arrival that he was picking up entrance tickets from his company, when in fact, it was his photography permit for the day. Cunning.

When I mentioned to Kevin I was going to include his Vizcaya engagement photography on my blog, I asked him to tell me a fun story about Ashley. He told me that they have a dog together and she wanted to rescue another dog. He was adamant he didn’t want one so they compromised. And got another dog. I love hearing these stories! looking for an engagement photographer at vizcaya museum or any of your favorite locations? contact me today!